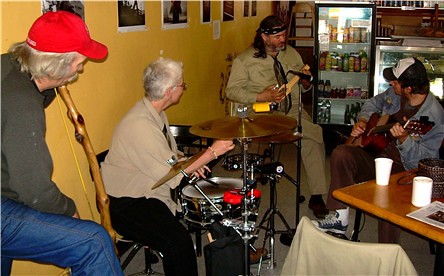 At the gig today, I hung out with Cynthia Strauss, Steven’s wife.  In chit chat and small talk I tried to tell Cynthia a story.  But I was inflicted with a temporary, acute, inability to make myself clear.  We will call it transitory inarticulateness.

Here, now, is my second attempt at this story:

This last Monday night I went to a BASFA meeting.  BASFA is the Bay Area Science Fiction Association.  I have been to very few BASFA meetings over the last few years.  At last Monday’s meeting I met a young man who was new to the club.  He told me a little about the kind of science fiction that he likes.  I mentioned a few authors I knew who wrote that kind of science fiction.  I mentioned, in passing, that I met this author, or another, in person.  This did not seem like an unusual thing to me.  I have been to many science fiction conventions, and I have met many Big Name Authors over the years.  But this young man was all impressed.

This young man at the BASFA meeting was all impressed by something I, and almost everybody else in the room, did without a second thought: meet Big Name Authors.  I told the young man of some of the biggest of Big Name Authors that I had met: Isaac Asimov, Robert A. Heinlein, Ray Bradbury and Harlan Ellison.  He had never heard of Harlan Ellison.  This explained a lot.  This new young member of BASFA is a neo.  He did not know about science fiction conventions.

It was time for me to shut up.  Being a namedropper was nothing but embarrassing.  Once I realized what I was doing, I don’t think that I spoke another word to the young man for the remainder of the evening.

In this blog, however, I can namedrop to my heart’s content.
---Pip R. Lagenta